After 5 months of sales in the US, it appears that Ford’s Mustang Mach-E BEV could be on pace for around 32,000 or more units sold in 2021, its first full year of availability.

Made in Ford’s Cuautitlán Assembly factory in Cuautitlán Izcalli, Mexico, the Mach-E received much press coverage the past few days based on an Automotive News article stating that “Ford has built 27,816 electric Mustang Mach-E models at a plant in Mexico this year compared to 26,089 copies of the traditional internal combustion engine Mustang at a factory in Michigan.”

While impressive and exciting as that is for electric vehicle and Mach-E fans, the reality is production of the gas-powered Mustang has been impacted by supply chain issues. “… Mustang and Flat Rock (Mustang assembly plant) have been impacted by outside factors, which has been the semiconductor chip shortage,” according to a statement emailed to Automotive News from Erich Merkle, Ford’s sales analyst.

Regardless, sales of the Mustang Mach-E are off to a solid start in the US in 2021 and could reach perhaps 32,000 in unit sales for the 2021. Key factors will include the continued chip shortage, though in another statement from Ford it sounds like the launch of its new vehicles like the Mach-E, Bronco and upcoming F-150 Lightning are being prioritized for chips over most existing models.

The Mustang Mach-E also was in the headlines around the world with the report last week out of Norway that the BEV had a total of 1,384 registrations in May for a 10% share of Norway’s overall car market. This vaulted the Mach-E to number one ahead of Toyota’s RAV4 hybrid, Skoda’s electric Enyaq, and the Tesla Model 3 took sixth place.

One thing that could impede the Mustang Mach-E from reaching more than 30,000 in US unit sales is if Ford seeks to stay in the auto and business press headlines by having the number one selling car and or EV in Norway for the remainder of the year. Because EVs dominate vehicle sales in Norway, it is often seen as a harbinger or EV trends and was even the basis of a humorous GM TV commercial during the Super Bowl featuring Will Ferrell. It could be enticing for Ford executives to ensure a huge supply of Mach-Es for the Norwegian market and potentially end the year with bragging rights as the number one selling BEV in Norway and ahead of the Tesla Model 3. 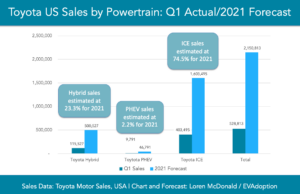 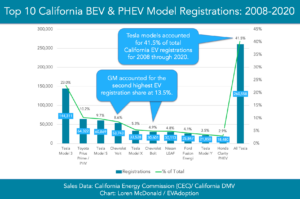 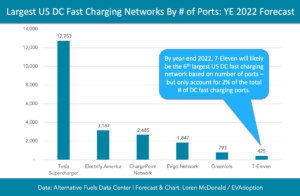 Convenience store chain 7-Eleven recently announced they are going to install at least 500 DC fast charging stations (ports) at 250 locations across the U.S. and Canada. Based on the ratio of DC fast chargers in Canada to the US, we are projecting that 400 of these fast chargers will be installed at approximately 200 7-Eleven stores in the US.